This last week I went to a themed cocktail bar in Edinburgh, run by the Pop-Up Geeks. Every couple of months they change the theme of the bar, and this time round it was Harry Potter!

I took so many photos (and had quite a few cocktails) but it was very dark, and I was using my phone rather than my camera, so you’ll have to excuse the quality. The cocktails we’re delicious, and they had so many different flavours and drinks to offer, and at points they would play songs from the soundtrack, which just added to the amazing experience. 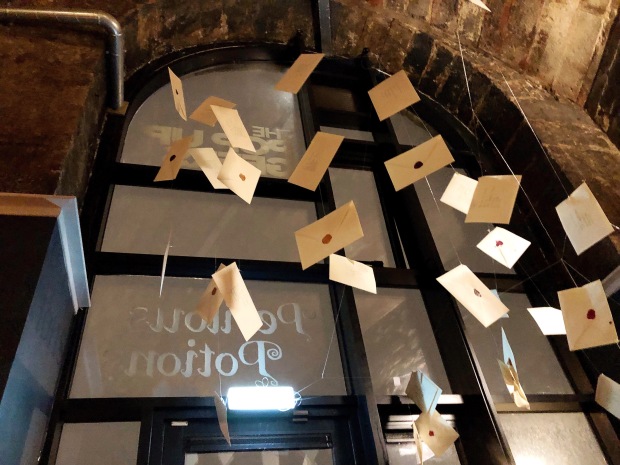 First off, as you walk in, the bar is decorated with letters hanging from the ceiling and framed declarations (like Umbridge’s) on the walls. The space itself is very small, but cosy. 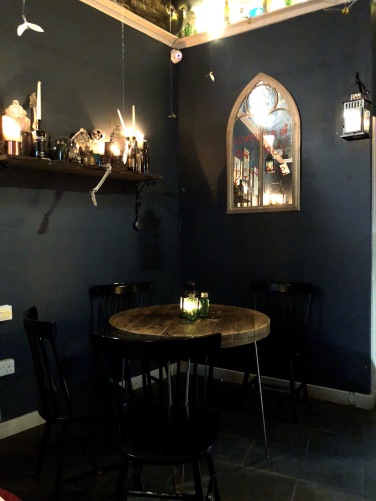 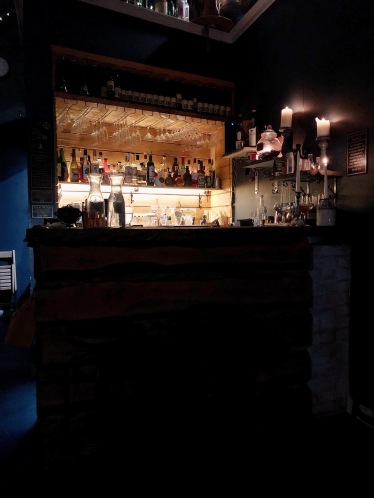 There are shelves with candles and potions bottles of all different sizes, broomsticks on the walls, and other little, creepy ornaments that give you a Harry Potter feel. The mirror above the table in the picture has “enemies of the heir beware” written in red paint or lipstick, which I thought was a lovely touch.

All the tables are rustic and wooden, which gave a lovely feel and added to the atmosphere of the bar.

The bar itself has even more candles and potions bottles for decoration, and above the glasses (it’s very hard to see in this picture) there is a shelf with empty, home-brewed Butterbeer bottles lining it.

Unfortunately, they were all sold out of their Butterbeer the night we were in, which was a shame as my boyfriend wanted to try it, but the cocktails we had instead made up for it!

The menus given to us were like textbooks from Hogwarts, and the staff were dressed up in robes – a lot of effort was put into the presentation of the bar, which really makes the experience better than your usual high end cocktail bar.

I found this note scrawled in the top corner of mine, and it gave me a bit of a giggle. 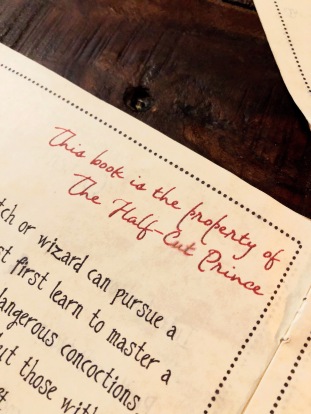 The menu came in a few difference sections – drinks you make yourself, drinks the bartenders make you, and then other beers and spirits you could buy. For our first round, we opted to get drinks made by the bartenders to warm ourselves up. 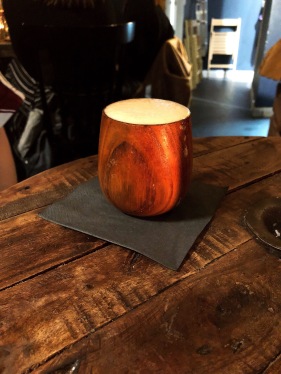 My boyfriend ordered the Pumpkin Juice, which was sort of similar to an Espresso Martini however it was made with whisky instead of vodka, and pumpkin spice. It didn’t taste too strong of coffee, and was really light, foamy and tasty, and came in a very cute, wooden cup.

I ordered The Portable Swamp which was a slime green colour, and looked a bit creepy, like a Potion you wouldn’t want to drink. It was a tequila-based drink, with apple, rosemary and grapefruit flavours. It wasn’t a like fruity cocktail, and definitely was an acquired taste, but I liked it. 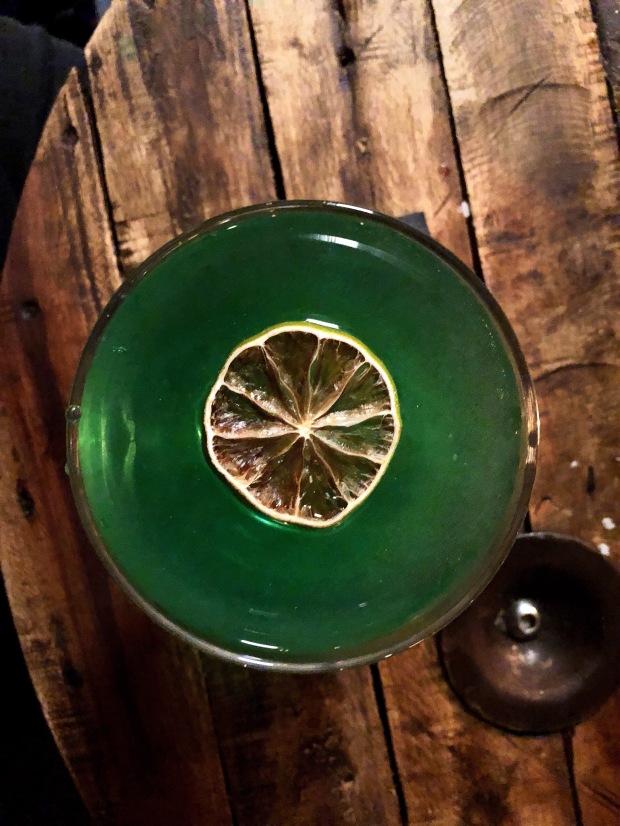 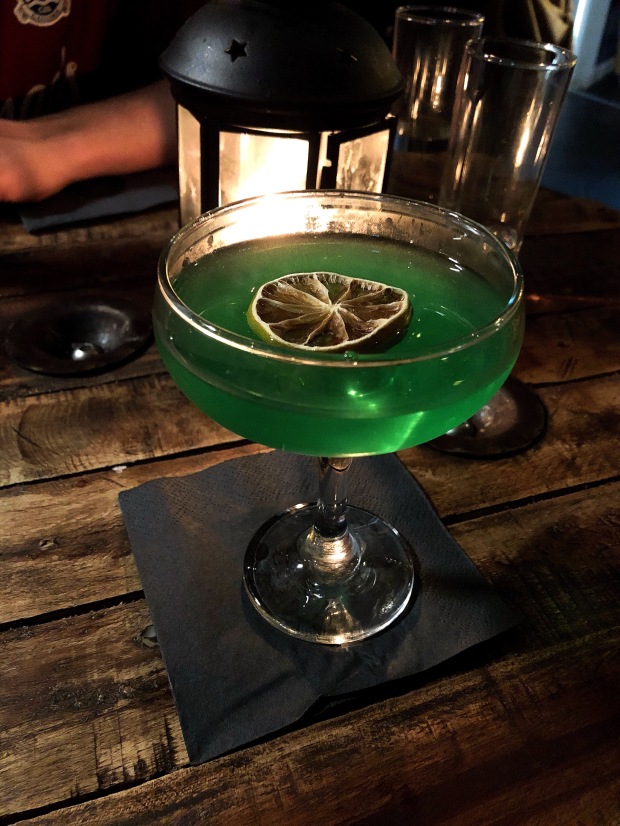 There were also other cool drinks like Dragon-fire Dram that had dragon chillies in it, or Basilisk’s Stare that was a purely jellified cocktail.

Next we ordered off the “Conjure It Yourself” list, which are the cocktails that are given to you already measured out into their portions, and presented almost like a Potions kit. You’re also given a scroll with the instructions on how to make the cocktail, and the staff are very helpful in giving you pointers, too.

We first ordered the Draught of Delirium and the Confuddling Concoction.

The picture on the left is the Draught of Delirium. It’s an Irish whiskey and sherry drink, with candy floss. The glass comes with the candy floss already in it, and you mix the other ingredients as per instructions, and pour it over. Ours changed to a wonderful green, glittery colour – however, I think that each one you order changes to a different colour as the bartenders add something to the glass that makes it do so. 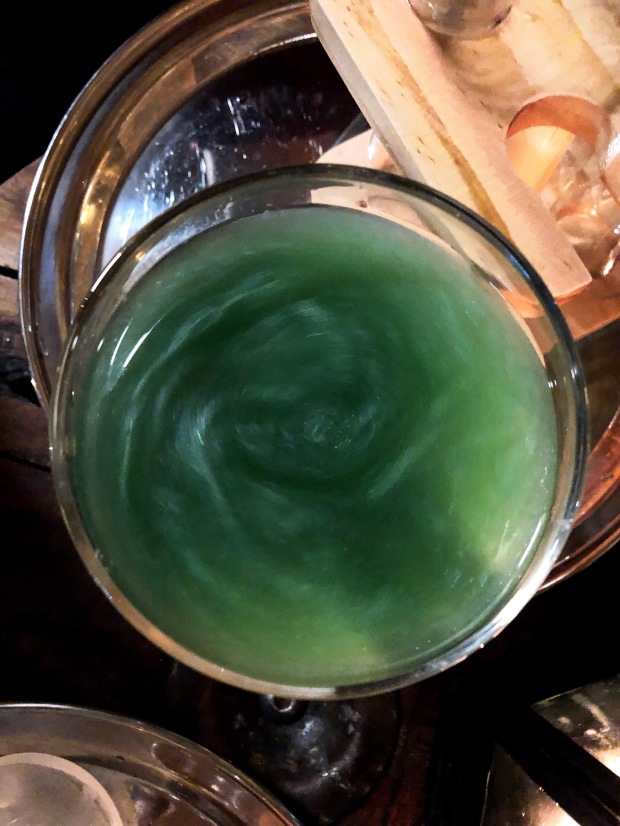 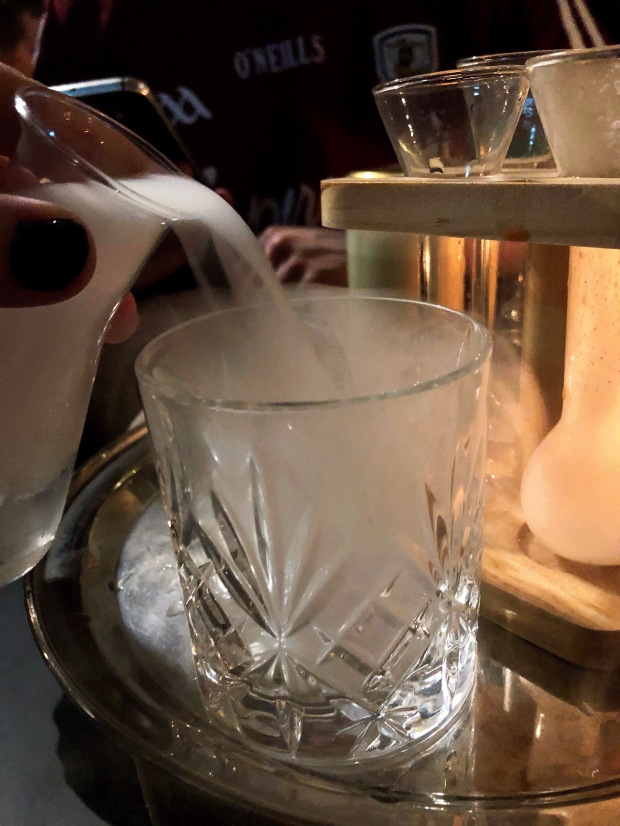 The picture on the right is the Confuddling Concoction, which I ended up not getting a picture of the final product (I’m sorry) but this was one of the cocktails that came with dry ice, which I loved so much! It made the glass smoke, which just made me feel like I was genuinely in a Potions class. I had to add the dry ice to the glass first, and then pour in my cocktail from the shaker (which are little jars, and so cute!).

The cocktail was similar to a Brandy Alexander, with brandy and cream, but was also made with dark chocolate. It was a gorgeous drink and so fun to make!

The, unfortunately, last drinks of the night that we ordered were the Gravitas Transverso and the Glacis Ardetium. 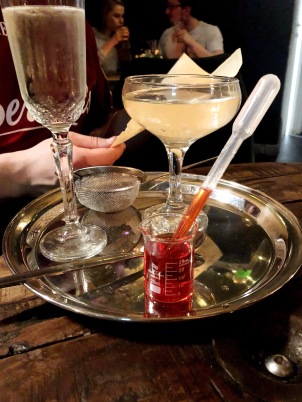 Gravitas Transverso was a glass of prosecco with “petrified”, or jellied, peach, strawberry or elderberry balls. You were given the mixture and dropper yourself, and had to make the flavoured bits by dropping the mixture into a separate glass.

You then fished them out and popped them into your prosecco. It wasn’t an adventurous drink, but something that was nice and simple, and that everybody could like.

Glacio Ardetium was a basic gin and fruit juice drink, with blueberry and cranberry – I love gin, so I was drawn to this one. Again, I lucked out and managed to pick another cocktail that was made with dry ice.

This time, the ice came in a cage at the bottom of the glass, so all I had to do was mix the cocktail and pour it in, and it gave the lovely, smokey effect once again. 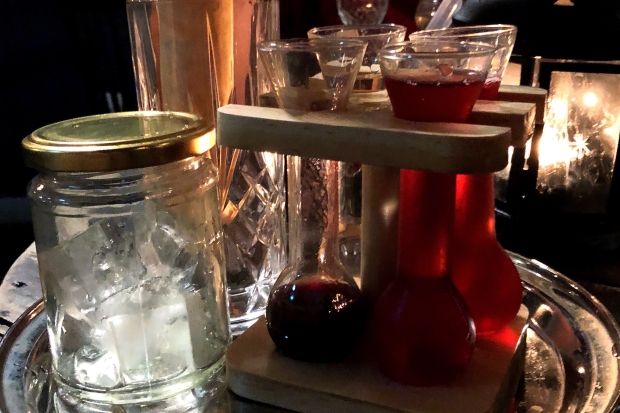 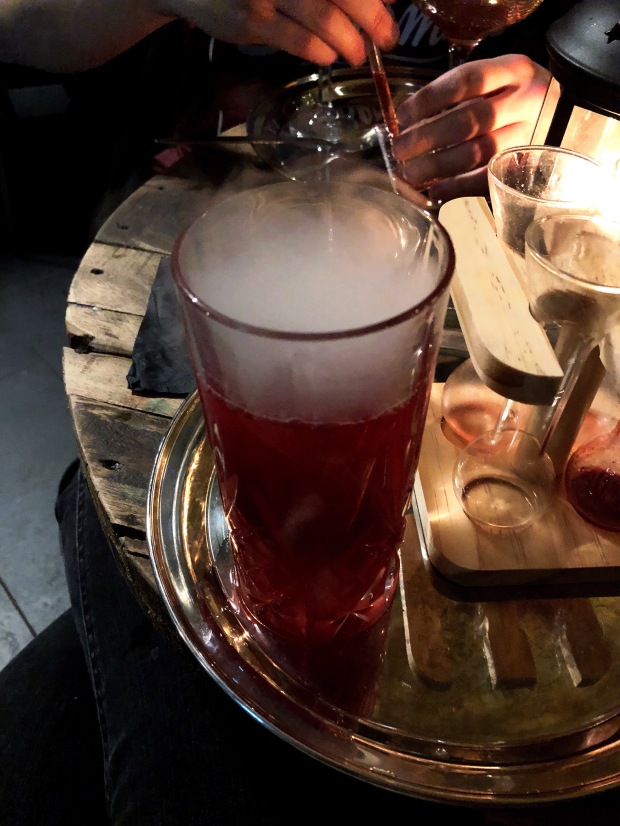 It was a really refreshing drink, however it tasted a bit too much like blackcurrant cordial for my liking, but it was still nice.

Overall, both my boyfriend and I had a lovely time, even if he was slightly appalled when they started playing the soundtrack. I’m really excited to go back when the theme changes – in the past, they have had Game of Thrones, The Walking Dead and Stranger Things! The next theme starts on the 6th May and it’s Rick And Morty, which is another love of ours so I will be booking a night out for us again when that comes around!

If you’re ever coming to Edinburgh and love booze and everything geeky, definitely check out The Pop-Up Geeks and see what they have on!

What kind of themed cocktail bar would you like to go to?